We’re most of the way through the year now, and we decided it’s about time to start getting retrospective as we plan for 2022. With that in mind, we looked back at the year to identify the top stories about brands and see what lessons we could draw from them.

Here’s what we learned. There still is faith in humanity

The top brand story of 2021, having generated nearly 1.3 million engagements, was about a stray dog, his beloved toy unicorn from Dollar General, and ultimately the dog’s adoption.

Number three on the list, delivering over 888k engagements, was a story about a high school principal propelled by a need to improve his students’ living situation, took a part-time job at Walmart, and donated his paycheck to support the kids. Walmart responded by donating $50,000 to the high school.

This shows that despite all the apparent pessimism in the world, there is still room for those moments of optimism that restore people’s faith, and brands are often a part of that story.

CEO’s can dominate a conversation in a way few other individuals can, with the heads of various companies appearing in the top 100 stories.

In an effort to curb pollution, former CEO & Chairman of Microsoft, Bill Gates, wants all rich countries to move to synthetic beef.

Hate speech or hated speech. The CEO of Tesla, Elon Musk, gives his opinions on the role of big tech and the CEO of Parler comments on being dropped by vendors.

CEOs/execs were the primary focus on 40% of the top 10 brand stories.

Pepsi joined up with Peeps to create an Easter-inspired marshmallow drink. This was the top brand story for the Food & Beverage category with over 820k engagements.

Who doesn’t want a deal from Disney? Their 4-day ticket promotion generated over 768k engagements and was the top Entertainment story of the year. While we are surrounded by Covid coverage, technology outperformed all categories including healthcare, representing 42% of the top 100 stories. This segment was led by the likes of Amazon, Parler, Facebook, and Apple.

The companies with the most mentions Amazon had the most brand mentions among the top 100 stories. Starting with the coverage on Jeff Bezos stepping down, worker union debates, and movie releases, but the majority of the top stories were centered on Amazon’s decision to suspend Parler, a social network favored by extremists, from Amazon Web Services. You can read more about the coverage of big tech more broadly in our recent blog here.

The top publishers writing about brands The Daily Wire brand stories focused on controversy. Some of their most highly engaged articles included Target dropping Chrissy Teigen’s cookware line, Subway owners reportedly pushing for Megan Rapinoe to be dropped as a spokeswoman, and the Georgia House voting to strip Delta of a $35 Million Tax Credit.

NBC covered a wide range of healthcare topics, but Budweiser’s decision to sit out of the Super Bowl in order to funnel marketing dollars into boosting vaccine awareness was one of their top-performing stories. Followed by a report that Apple’s iPhone 12 magnet deactivates implantable cardiac devices.

CNN’s most engaged brand coverage was focused on Pfizer. Two of their top stories were about the FDA’s approval of the Pfizer vaccine, followed by a story announcing the vaccine is well-tolerated in adolescents.

NPR was successful in reporting on corporate America’s response to the minimum wage debate. Their top brand story highlighted Costco’s efforts to raise their minimum wage to $16/hour. This was received well by readers as the story generated over 244k engagements.

CNBC had one of the most interesting brand stories of the year, reporting how a Texas man used his new Ford F-150 hybrid to power homes during the February winter storm. Earned media for the win having generated over 388k engagements.

The themes of the top stories about brands Whether it’s a brand dropping a celebrity, consumers protesting a brand, or termination of a partnership, controversial themes represented 22% of the top brand stories.

It’s not surprising that Covid is near the top of the charts, but the top Covid-related story had a negative spin. The New York Post reported that 23 Norwegians died after receiving the Pfizer Covid vaccine. This story outperformed all of the positive coverage from Pfizer having generated 541k engagements.

We previously highlighted Disney’s successes, but almost all of their major promotions made our top Brand 100. The promotion for their Cruella sequel, followed by the announcement that a baby zebra was born at the Animal Kingdom generated over 650k engagement combined.

Brand disputes and brand-related Covid content dominated the top 100 stories, but as I stated earlier, there is still faith in humanity.

Below are a few positive stories that made our top 100. 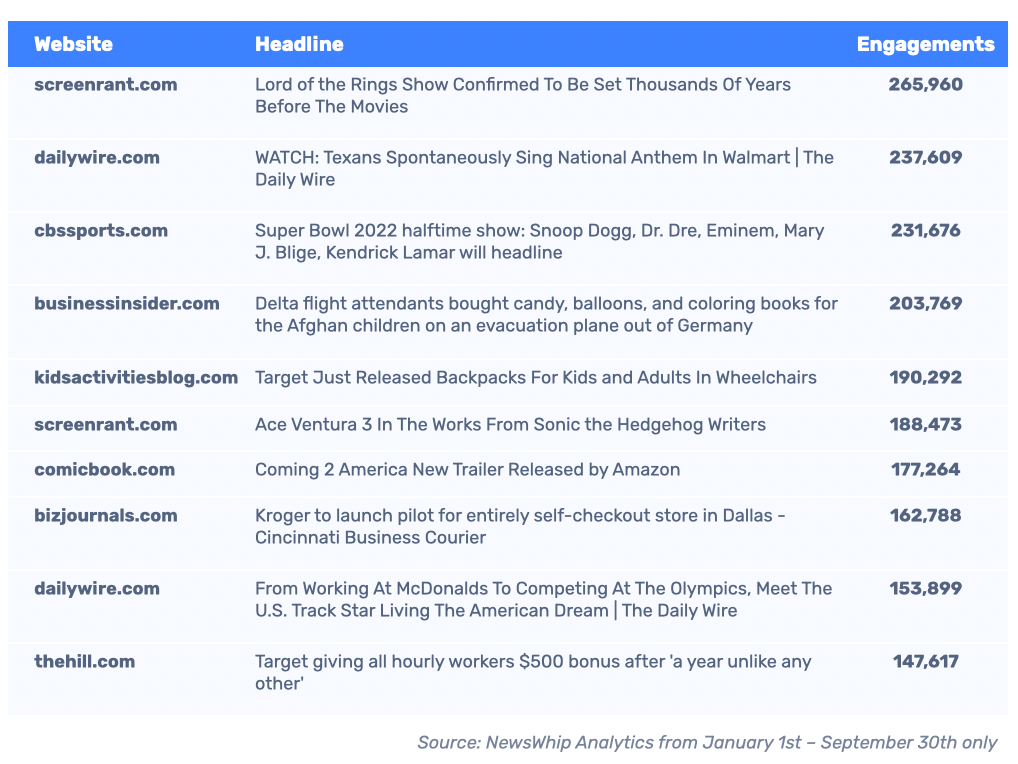 There’s a lot of information to digest there, so here are some of our key takeaways.

Before we sign off, we’d kick ourselves if we didn’t mention a fun piece about Ford that generated over 162k engagements. After all, who wouldn’t want to have one of these? If you’d like to do this kind of analysis for yourself, you can get in touch with us here.