Accusations of sexism dominated the top March Madness stories in 2021 The NCAA recently came under intense public scrutiny, as disparities between the conditions offered for men’s and women’s basketball teams were exposed during the annual March Madness tournament. Viral photos and videos surfaced and spread across the internet, which showed glaring differences between the men’s and women’s facilities at the venue.

The men’s teams had access to a state of the art weight room, catered meals, and P.C.R COVID-19 tests to ensure their safety. Meanwhile, the women were reportedly given a single rack of weights, pre-packaged, processed meals, and the cheaper, reportedly less effective COVID-19 rapid antigen tests.

Criticism immediately poured in from players, coaches, and professionals across the globe — all taking a stance against what has been painted as “blatant sexism.”  Though the NCAA corrected their wrongdoings by improving conditions and treatment for the women’s teams, the coverage of this matter has already attracted extensive attention to the organization.

We measured both public and media reactions to the outcry throughout the month of March, gauging which stories and outlets were driving the most engagement to the news.

The public interest in the March Madness inequality conversation

On March 18th, Ali Kershner, the performance coach for the women’s basketball team at Stanford University, posted a photo on Instagram showing the differences between the men’s and women’s weight rooms at the tournament. The photo called out the NCAA for giving the women only six sets of weights for the 68 teams competing, with the heaviest weight being 30 lbs, while the men had a full gym with all the requisite weights and machines for an elite sports team.

The story was further aggravated when Oregon women’s basketball player Sedona Prince posted Tik Toks to her 1.5 million followers, showing the women’s unsatisfactory dinners in comparison to the men’s high-end catering, and debunking the NCAA’s apology which had claimed that the women had less equipment because there was less space in their venue. 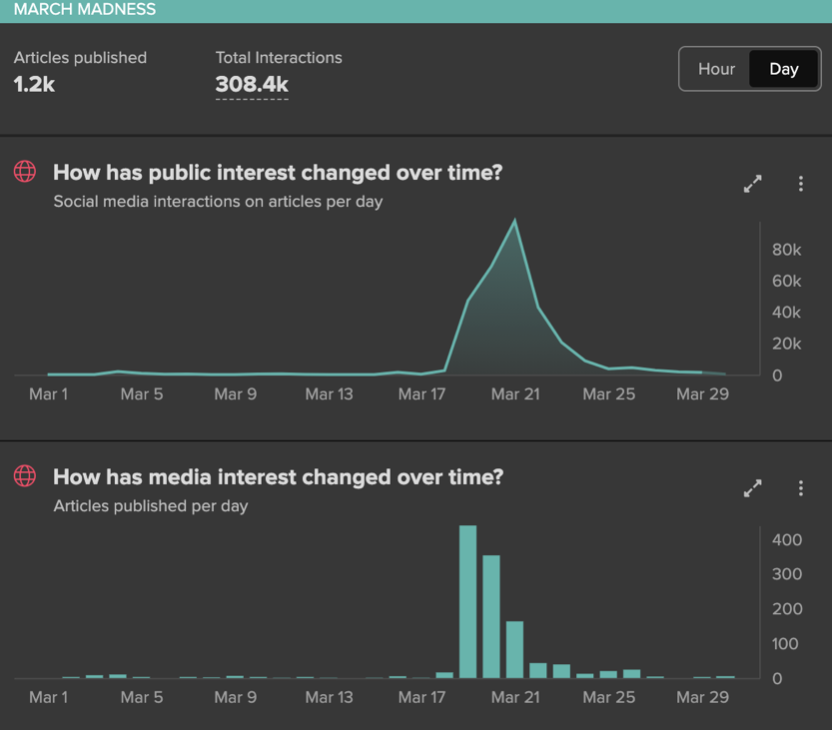 Though the story broke on the 18th, both public and media interest remained low until the following day. This shows the importance of cross-network monitoring when it comes to stories like this, as sometimes narratives can take a day or two to gather steam as they jump from social media to the traditional media and then back to social media as articles are shared.

Media interest reached its peak on the 19th, while public interest peaked on the 21st, hitting close to 100,000 daily interactions. The stories that highlighted both the original problem and the NCAA’s resolution performed the best in terms of engagements.

Most engaged stories about the disparity

When it came to the top articles, most of them focused on the NCAA’s response to the initial backlash against them.

The most engaged article was a scathing perspective piece by the Washington Post’s Sally Jenkins. Jenkins began the article with, “I’m tired.” The simplicity of the phrase translates to being tired of the years of mistreatment endured by the women’s teams, tired of the NCAA’s lack of recognition of their accomplishments, tired that their side isn’t taken as seriously as the men’s, even though the opportunity for revenue is there.

Following closely behind Jenkins’ story was the Los Angeles Times. Paying homage to the famous Los Angeles Laker, this article focused on Kobe Bryant and what his possible response to the situation would have been. UCLA’s women’s basketball coach Cori Close stated, “[The situation] made me miss Kobe Bryant…He’s such a pioneer for speaking up on behalf of our women’s game.”

As a self-professed “Girl Dad,” Bryant upheld the belief that women’s sports should be treated equal to men’s. As one of the most influential basketball players of all time, it’s unsurprising that this article garnered over 22.7k engagements in less than ten days.

Interestingly, even after the NCAA resolved the issue at hand, the damage control was not enough to sway the conversation towards other subjects. Articles shifted towards discussing the inequality in college sports more broadly, as well as other athletes speaking out, such as members of the USWNT, who have faced similar issues in their respective sport. President Biden honored Equal Pay Day on March 24th by having outspoken women’s activist and USWNT star, Megan Rapinoe, deliver remarks about inequality in sports, offering her own take on the NCAA’s treatment of the tournament. The top 50 articles focusing on the NCAA more broadly throughout the month specifically all related back to the disparity between the men’s and women’s teams. The number one article continued to be the Washington Post’s op-ed with 25.7k engagements, followed closely by the Los Angeles Times’ story on Kobe Bryant with 22.7k engagements.

Other stories included more coverage on Sedona Prince and her reaction to the upgrade, as well as the Stanford women’s basketball head coach, Tara VanDerveer, calling the NCAA out for not only the weight room, but especially the COVID-19 testing protocols. She claimed that it was “purposeful and hurtful sexism,” stating, “women athletes and coaches are done waiting, not just for upgrades of a weight room, but for equity in every facet of life. Seeing men’s health valued at a higher level than that of women, as evidenced by different testing protocols at both tournaments, is disheartening.”

The top stories about March Madness

Since March Madness is something of an institution when it comes to American sports culture, we researched the top stories on the tournament as a whole during the month of March. It’s interesting to note that coverage about such a high profile event like March Madness, with its bracket-busting games and upset wins that set the country in a frenzy, focused entirely on the inequality displayed between the men’s and women’s teams. Though the publishers were less mainstream than usual, engagements on the topic remained steady.

Stories ranged from the initial problem, to the backlash, to the “systematic sexism” displayed by the NCAA. In what could have been a look at the top teams, most thrilling games, or winner predictions, the discrepancy of the treatment of the women’s teams prevailed.

Brands that stepped up to the March Madness crisis

As the NCAA faced the consequences of their actions, other brands capitalized on the opportunity to help out and receive good publicity. When the story broke, Dick’s Sporting Goods tweeted out a picture of three U-Haul’s filled with “truckloads of fitness equipment” for donation. The tweet reached 38.1k likes on Twitter, with rave reactions from the public for the gesture.

The stories were picked up by national outlets like people.com, who had over 6k engagements on their article, and tournament local sites like mysanantonio.com, who received almost 3k engagements.

The NCAA ended up providing the equipment themselves, but this was a fascinating window into how some brands can turn another’s crisis to their own advantage by taking a stand on topics that are important to them and on which they have authority.

If you’d like to monitor the public and media interest to other crises, as they happen, check out the NewsWhip product suite.