2021 saw the return of the Oscars, albeit delayed from its usual time slot in the year due to the pandemic. Many blockbusters delayed their releases to coalesce better with when audiences would be allowed back in cinemas, and despite a series of historic ‘firsts,’ the Oscars failed to capture the public imagination this year.

On Monday, Nielsen reported that the viewing figures for the Oscars had dropped dramatically year over year, and our own data reflects similar trends in engagement to the coverage, which have dropped off steeply compared to last year’s levels.

Public interest in the Oscars since 2018

The chart above shows the total engagement (which comprises Facebook likes, comments, and shares, Twitter influencer shares, and Pinterest pins) to web coverage of the Oscars over the last 48 hours on the day of the event through the following day. NewsWhip users can access the dashboard here or by clicking on the graphs in this piece.

This steep decline was also somewhat reflected in the total number of articles written about the fabled awards ceremony. However, this was not the whole explanation for the drop. There were 31,000 articles written focused on the 2021 ceremony, which works out at a little over half of the level written in 2020 and 2019. The drop in the level of public interest this year, then, was a much more dramatic one than the drop in the level of media interest, with the former being more than 75% lower than it was for 2020 — about half what we should have expected if the ratio of public interest to media interest had remained roughly constant.

It’s always easy to be wise after the fact of course, but looking back it is far from surprising that the Oscars failed to impress this year, and we only have to look back at previous awards shows to see why.

How The Golden Globes predicted the dip in Oscars interest

What’s most interesting about this huge decline in interest is that savvy observers could have predicted it using NewsWhip data. We noted in our newsletter recently that the shape of engagement to the Academy Awards almost exactly mirrored that of the Golden Globes this year, and that fact remains true when we look at comparisons for previous years too.

Public interest in the Golden Globes since 2018

The ratio for the Globes follows a very familiar pattern as it did for the Oscars. Roughly half as many articles were written about the ceremony as in previous years, but engagement dropped from 10.3 million in 2020 to 2.9 million in 2021 — a drop of around 70 percent. Similar to the Oscars, 2020’s engagement for articles about the Globes had dropped slightly itself from 2019’s.

The pattern from year to year was almost exactly the same across the ceremonies over the years, and was only thrown off slightly by a surge of interest in Oprah Winfrey’s speech at the Golden Globes in 2018 and speculation she might run for president. Other than that, the Globes served as an almost perfect predictor of how much public interest there would be in the Oscars that year.

We’ve talked before about how you can use NewsWhip data from the past to make predictions about the future and find inflection points, and this is another example of that.

The viral stories about the 2021 Oscars

In more bad news for the Oscars, the most engaged articles of the year were largely negative in tone or criticized the event. Where in previous years articles about the best dressed stars or the Best Actor winners received hundreds of thousands of engagements, this year the top articles were almost often political or focused on ‘culture war’ topics. The top four articles all came from the Daily Wire, and all criticized the event in some way, combining for around 800k engagements across the four stories. The top article that was simply about winners of the awards came from the Daily Mail, and received around 125k interactions. The Mail’s piece was the only one about winners to receive more than 100k engagements. Other top stories included Anthony Hopkins’s win for Best Actor, and a series of historic firsts at the awards. 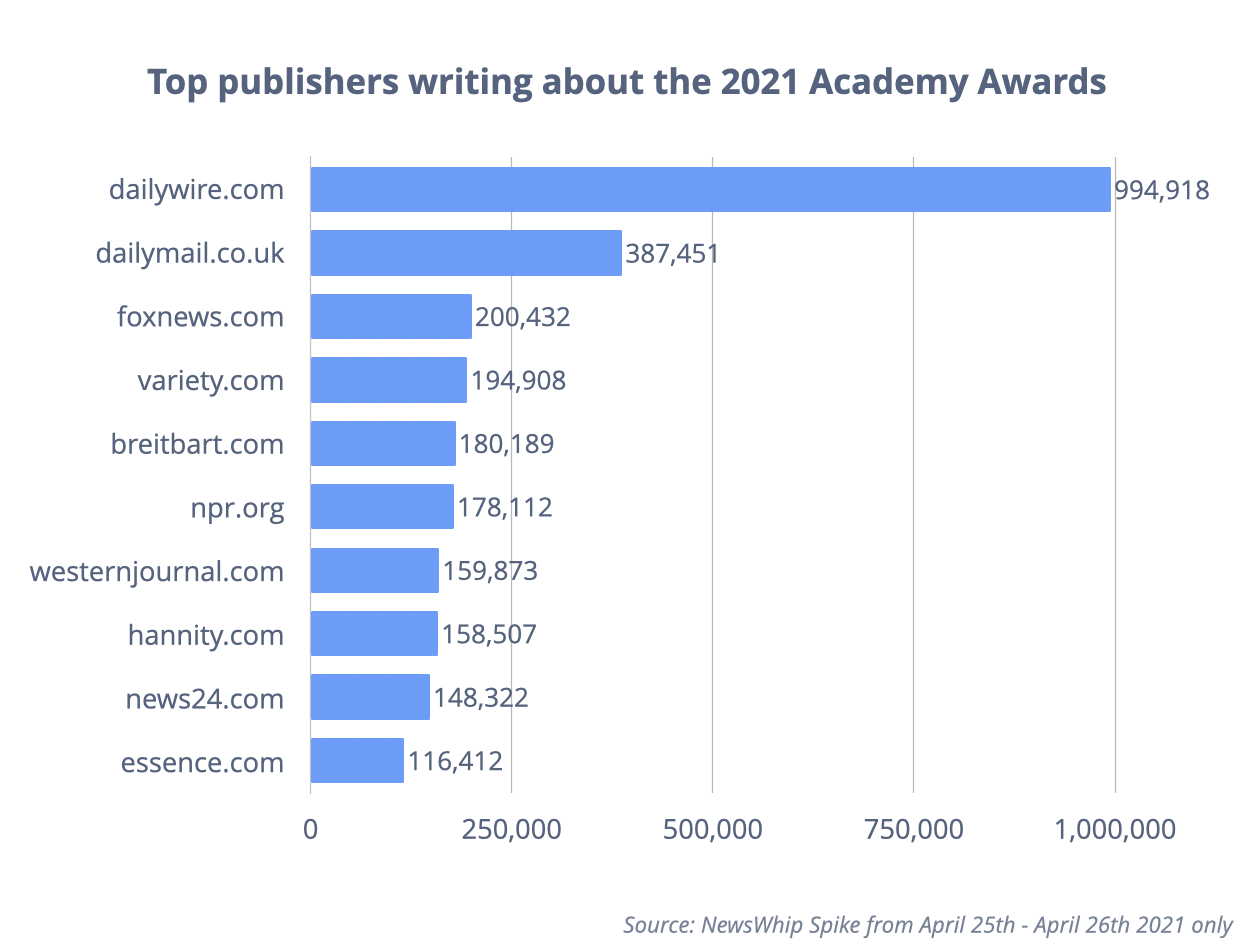 The lack of engagement overall is perhaps best reflected in the top publishers, where the Daily Wire was dominant over all others. The Wire had almost triple the engagements of any other publisher writing about the Academy Awards.

If you’d like to monitor real-time coverage of events and compare with previous years to make predictions about the future, check out NewsWhip Spike.