Which publishers are starting September strong on social? We take a look in our monthly Facebook rankings.

This month, we have the biggest shakeup in the rankings in quite a while. That’s on us.

Historically, we have ranked the top sites by combining network publishers with their local outlets or other subsidiary domains. For instance, we combined NBC with MSNBC, Today.com, and so forth.

This has led to some confusion, and a continued domination from the publishers with the biggest local and spin-off networks. To understand the impact of each publisher on their own, we are ranking the domains individually this month and going forward.

Let’s take a look at how it played out for August, but first a few points to note from the data: 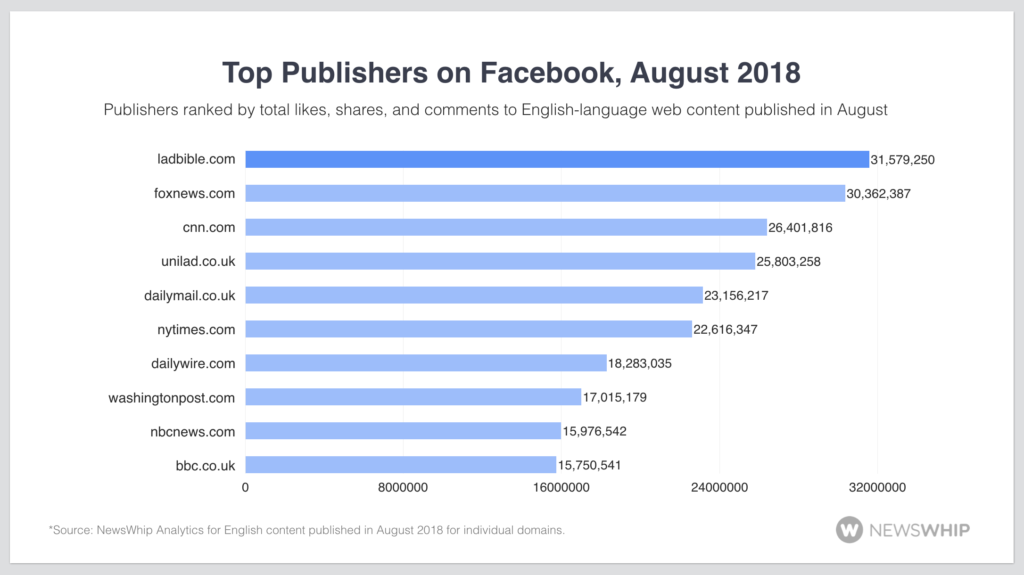 Our rankings chart looks almost entirely different from last month. LAD bible is in top place, followed by CNN and UNILAD. We had already marked gains from the two viral publishers last month, as the two sites manage to achieve wildly shared hits across a smaller set of stories. Even despite our restructuring, the jump is remarkable.

LAD bible saw 2.3x the engagements as last month, and UNILAD saw a 1.5x increase, both while producing less content.

Below, is how this ranking would have appeared last month with our new structuring, for context. CNN took the top spot for last month, followed by Daily Mail and Fox News.
Notably, Facebook has recently deployed a trustworthiness factor in how it ranks sites in its news feed, so we’ll be watching to see how traditional publishers perform over the coming months.

Beyond UNILAD and the LAD bible, other top publishers that saw growth this month were Washington Post, Fox News, CBS News, ABC News, NPR, among others.

Within the top 25 for August, we have the Daily Wire at #7, Breitbart at #15, and Western Journal at #20, showing that partisan journalism is driving more engagements. Notably, these sites grew their engagements this month.

While there has been some debate over whether these sites were being censored by Facebook, we can see at least in terms of shares, likes, comments, that hasn’t been the case.

As in July, some stories proliferated the top rankings in August. John McCain and Aretha Franklin’s passings were engaged with at viral proportions.

Another story, about convicted rapist Brock Turner losing his appeal appeared across several of the top stories, as did the recovery of missing Mollie Tibbetts’ body, arrests at an extremist New Mexico compound, and the Madden shooter.

Within the top stories, the top from the LAD bible tended to be either more positively focused or bizarre news stories. Again we saw that comments have been outperforming shares for these publishers this month. One of LAD bible’s top stories, “ASOS Is Selling A Crop Top For Men”, saw 44 percent of its total engagements come just from comments.

Across the top 25 publishers, almost half saw more than 20 percent of their total Facebook interactions come from comments alone this month.

We’ve seen some questionable, low-quality content going ultra-viral over the past few months. This is reflected in the rankings with FeedyTv and others featuring. We’ve made note of this in the newsletter recently, but it’s still mildly shocking to see three such websites in our top 25 this month.

The story “A group of black bears caught a New Jersey family by surprise for having a wild pool party in the backyard” drove 2.8 million engagements. Digging a little deeper into our NewsWhip Analytics tool, we can see that these stories do end up shared on a wide variety of Facebook Pages with niche and active audiences.

Below are the top 25 sites in August, ranked by total Facebook engagements on stories published that month.