Which reporters are driving the most engagements on Facebook? We rank them.

(Ed: This data set has brought a lot of attention on Twitter. Here’s our CEO’s response.)
With social platforms like Facebook putting an emphasis on meaningful engagements, publishers and content creators have to reassess what makes a successful community, one that loyal readers will return to.

One way to do this is by fostering strong connections between journalists and readers. Rather than a nameless entity, readers can connect an actual person to the reporting. We’ve seen this work with sports and highlighting a hero athlete, and with influencers building up their own audiences.

On social, this already exists with journalists like Nicholas Kristof of the New York Times, who has a loyal following, and through Dan Rather’s News and Guts community on Facebook: Kristof’s Page, while small, hasn’t seen the same decline as many other Pages, post-algorithm.
In fact, Edelman’s Trust Barometer report in January actually found that trust in journalism itself is on the rise, while trust in the general media platforms declines. With Facebook Page content deprioritized, publishers need to demystify what is working on the web to break into users’ news feeds.

Here’s what we found.

Which reporters have managed to thrive despite shifting platform changes? We limited our scope to English-language web content. Looking at the top 100, a few articles were attributed to “contributor” or to the name of the publication so we discounted those. This brought our analysis to 82 top authors.
Here are the top ten reporters and authors for February 2018. (You can check out the top 25 here): 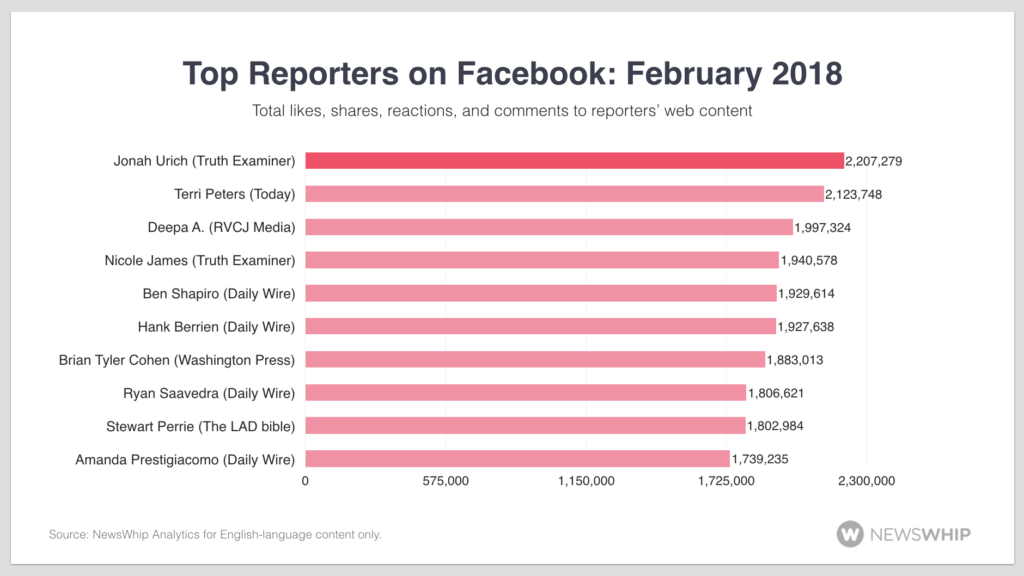 Looking at the top authors, a few trends jumped out at us immediately.

In a previous version of this analysis, the top author was Ryan Shattuck, a reporter for the Onion, a satirical news site. This was due to the Onion being un-bylined, though the articles were attributed to Shattuck in the metadata.

In fact, Shattuck himself tweeted, in classic the Onion fashion, “The proper credit belongs to the 350,000 Onion journalists in numerous news bureaus and manual labor camps stationed around the world.”
Still, four of the articles attributed to Shattuck and the Onion drove more than 100,000 Facebook engagements a piece. The top web article, about the Westminster Dog Show, drove more than 450,000 interactions:

What publications do the top reporters represent?

Beyond the Onion, the top authors were primarily from hyper-partisan sources like the Daily Wire, Truth Examiner, Breitbart, Washington Press, and several small but politically-charged sites. Within this breakdown, there were 32 conservative authors vs. six liberal authors. Most authors on our list only wrote for one site, but a couple of the conservative reporters had their work republished on other hyperpartisan offshoots.

Horrifyingly enough, two authors from fake news sites featured. An author from the fake news site, Your Newswire was towards the top of our list, ranking in at #12. Baxter Dmitry wrote 81 articles in February, driving more than 1.7 million Facebook interactions altogether. Jay Greenberg featured at #38 for fake stories from the site Neon Nettle.

Beyond that, where did the other top authors hail from?

Authors from the LAD bible and UNILAD also frequently made the list of top authors. When it came to general news publishers, NPR, MSNBC, CNN, NBC News, Huffington Post, Yahoo!, and a few others made the list.

Lifestyle and culture publishers had a few successful authors as well: the Atlantic, the New Yorker, Slate, and Thrillist each had an author in our top 50.

One local news publisher, Alabama Local, also had an author in the rankings for a story about a rare yellow cardinal. This story was also mentioned in our rankings of the top publishers for the month.

A few niche publishers and blogs like 24/7 Sports, For Every Mom, and Animal Channel featured. The lifestyle publishers (and For Every Mom) were the ones in our top 50 that had the top interactions per post.

June Rivers of the now-defunct LittleThings actually made the list of top authors. Despite the publication closing, Rivers still drove approximately 870,000 Facebook engagements to her articles. Two other positive news publishers, Spotlight and Love What Matters, also had top authors in our analysis.

Which publications had the most top authors? Conservative publishers and viral publishers contended for the most authors on our list. Daily Wire had ten top engaging authors, followed by UNILAD at six and Western Journalism at five.

One hit wonders or marathon runners?

Another point to note is how successful these authors were in regards to their publishers’ top content for the month. Were the reporters producing a huge number of articles that dialed up the engagements for them, or did a few key stories hit it big for their publishers last month?

To really understand how successful these authors were, we looked in NewsWhip Analytics at a few of the publishers. We analyzed how many articles of the publishers’ top 100 articles were written by their most engaging author: As we can see, most of these top authors contributed a good percentage of their publications’ top 100 stories for the month.

Truth Examiner’s top 100 articles were completely split up by Jonah Urich and Nicole James. The Daily Wire’s top five authors made up 63 percent of its top content.

Why did these authors do so well?

So, is there actually a trend here or are these publishers just doing well?

When we looked at the top publishers of February 2018, was there any overlap between Facebook’s top publishers and top authors? Daily Wire was the fifth top publisher this past month, and 12 of our top 25 publishers had an author in our analysis.

There could be even more authors of note — some publications didn’t always attribute authors to articles in their metadata, like the Hill and many NBC properties.

Still, with half of the top publishers represented, it’s clear there’s some relationship here, but we’ll need to dive in to understand if it’s the chicken (the publisher) or the egg (the reporter) that’s coming first.

What are these reporters doing to drive engagements?

What do these authors get right? Turns out weird news, current events, and politics are the most shared trends among the top reporters.

Contrary to what Facebook has announced, a few of the top authors have also seen their engagements come from stories that might seem a bit like clickbait. Those were primarily the very niche hyper-partisan publishers, and the Indian viral publisher, RCVJ.

Despite this trend, the top reporters’ headlines tend to be attention-grabbing, full of provocative verbs or short, eye-catching statements, across verticals.

Weird news, and weird news tied to current events was another trend across the top reporters. Again, these stories pop out compared to the usual flotsam in one’s news feed, and then drive more interactions. We’ve already explored the tactics of hyper-partisan and fake news publishers. Their tactics often speak to fear, outrage, and confirming what their readers want to believe.

Politics continues to drive conversations on social, even for the general news reporters.

They tweeted their thoughts and prayers. She responded with receipts.

Posted by HuffPost on Wednesday, February 14, 2018

Ed Mazza, our top reporter from the Huffington Post, saw the majority of his engagements come from such stories.

In the next few weeks, we’ll dive further into specific verticals, and explore deeper how reporters are building relationships.

For now, we’ve seen a few publishers that rely on strong communities are weathering the Facebook algorithm. We’ll be exploring them and more in the coming weeks. To learn more about the top reporters in the political sphere, check out our 2018 guide to partisan publishers and political content.