Videos or links: which formats are worth it on Facebook?

Publishers and content creators alike are still navigating the aftershocks of last month’s news feed shift.
As personal updates become more important (hello there, Facebook lists), what sort of content will naturally rise to the top? Specifically, what formats?

Given Facebook’s emphasis on video over the past couple of years, will this continue to be what captivates social audiences and gets them sharing? Facebook’s Adam Mosseri said that the platform will be moving away from video content that encourages passive scrolling. It’s all about the interactions.  Though, despite this update, Facebook also recently announced that Watch will have a breaking news section.

We’ve seen publishers shift toward a video-first strategy, but does this still ring true and does it hold true for everyone? USA Today is adding 20 more to its video team, but this could shift to other platforms, or even off-platform entirely.

To understand which formats are winning the day across Facebook, we took a look in NewsWhip Analytics at:

Examining the top 100 English-language posts from just publishers and brand Pages, we saw that in terms of total engagements (likes, shares, reactions, comments), 98 of the top 100 posts in January 2018 were native videos.

This video from Cheddar was the most shared publisher content of January, with 1.9 million shares. Videos are still top of the charts for Facebook, but it’s worth examining how top publishers are diversifying their strategy, and which formats are delivering results.

We analyzed 30 top publisher Facebook Pages to find out how these publishers are diversifying their Page strategy, after the giant News Feed reset. We looked at viral publishers, news publishers, and more niche publishers to get a broad look.

Given that January 2017 was a big month for news with Trump’s inauguration, this was a tall order. However, we saw that despite the algorithm change, our publishers were actually publishing a bit more. 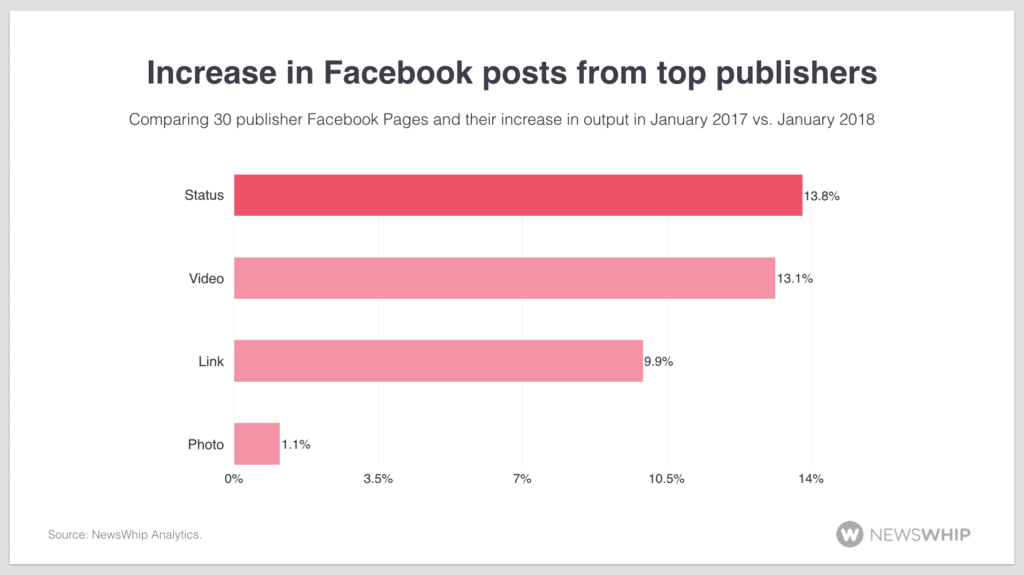 Despite this relative increase in output, the ratio of formats hasn’t really shifted. Video is accounting for the majority of posts, followed by links, and then photos. There’s been less video from 10 of the publishers — the likes of Dodo, Fox News, the Daily Mail, CNN, BBC News, the Hill, NPR, the New York Times, HERB, and 5-Minute Crafts.

After a heavy reliance on platforms, publishers may be looking to grow more of their owned audience. Communities can still be cultivated platform to platform, and debate can be encouraged on Facebook posts. Publishers are encouraging their followers to join Facebook groups and actively participate: The biggest increase in links posted came from NowThis Politics. NowThis, which famously got rid of its homepage years ago, has revived it. Meanwhile, on the other end of the spectrum, NBC News has ramped up its video output by 180 percent, compared to last January.

The output is one thing, but whether those formats will deliver is another thing. So what’s the payoff of each post type? 5-Minute Crafts’ posts are highly actionable, and its videos drive an average of 2,441 comments per video already. We’ve talked about the success of how-to videos on Facebook here, previously.
We recently took a look at the difference in driving likes vs. comments on Facebook here.

Recently, we noticed that there was a correlation between shares and emotional content. When we looked at the top shared content on Facebook, those posts had a higher percentage of Reactions than less shared posts.

This in mind, we took a look at what formats drove the most Reactions for the 30 publishers.
Interestingly, 10 of the publishers saw the highest average of Angry reactions on their links posts, such as NPR, below: Looking overall, there’s been a general increase in Reactions to these Pages’ top output. We analyzed nearly 1000 posts in January 2017 vs. 2018 to see the difference in engagements. We can see that Reaction usage has certainly increased, along with comments.

What are these publishers doing right?

When we took a look at the top content across these 30 publishers, we identified a few trends. We primarily looked at the publishers that have seen increases in their average shares and comments.

While video is still the winning format, the actual substance of your content is important. Here are a few quick tips to keep in mind, from the top content:

See the Facebook posts that are driving the most engagements in real time, with NewsWhip Spike.